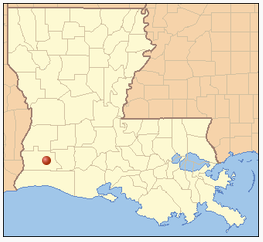 With respect to the pipeline leak which was unrelated to the power outage but was discovered after the rainstorm-No. CITGO had no indication that the line might be susceptible to leaking. The leak has been determined to be from internal corrosion. It is possible that the hail may have contributed to starting the leak. With respect to the electrical failure-Yes.

The storm caused a loss of power at Substation 21 and power blips on lines from Entergy impacting the Sulfur Recovery Plant. CITGO believes water entered the Substation via a the joint b/w the roof and the side wall causing a fused switch failure. Loss of power resulted in higher pressure and increase in liquid levels causing flaring at B-7. Loss of amine flow and hydrogen sulfide absorption generated heavy smoking from some of the boiler stacks and upset the Sulfur Recovery Plant. Operations pnnel inadvertently overloaded the Central Amine Unit causing high SO2 emissions throughout the Refinery. The crude oil leak was caused by internal corrosion. Limited offsite impact from soot from smoking boilers. REMEDIAL ACTIONS --> A Root Cau